Professor Ethelene Whitmire
I am a professor at the University of Wisconsin - Madison's School of Library & Information Studies.

I was excited to find out that there is a new biography of poet Countee Cullen published by the University of Chicago Press. I just downloaded it this morning onto my iPad. Cullen often stopped by the apartment that Regina shared with Louella Tucker and Ethel Ray at 580 St. Nicholas Avenue.


Ethel recalled, “…I would say that Countee Cullen used to drop by most frequently on his way home from school.... He was always so unassuming and charming, a fine young man, and we were only too happy to have him come, whatever we were doing we would stop and listen to it.”

Ethel further recalled, “Yes, we knew Countee and we saw a great deal of him…he came by quite often to read parts of poems that he was in the process of writing. And he would come in and say, ‘would you like to hear what I’ve written’ or ‘do you have time to listen to something that I’ve written." 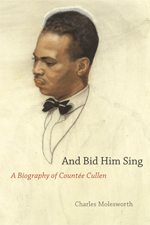